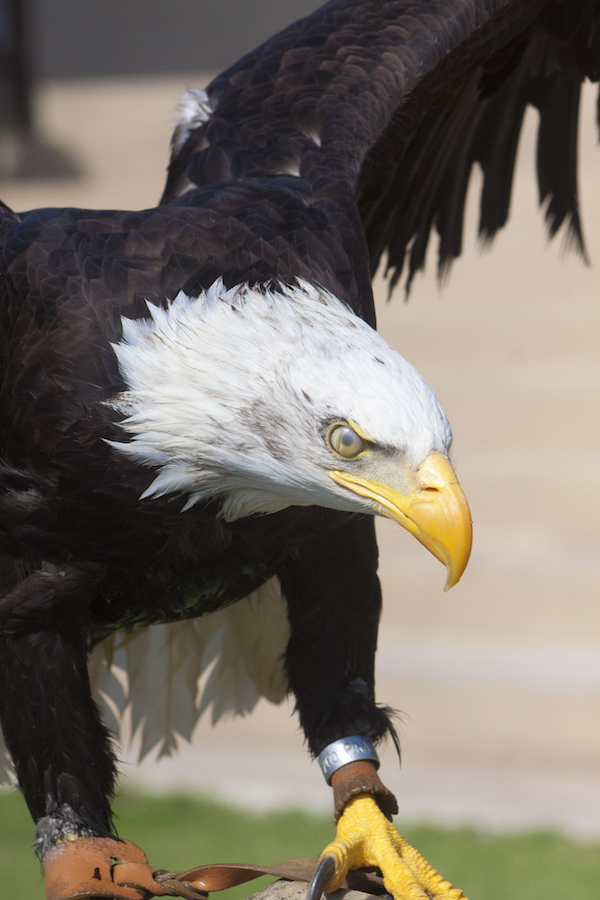 The Bald Eagle (Haliaeetus leucocephalus), is a bird of prey found in North America. It is most recognizable as the national bird and symbol of the United States of America. The species was on the brink of extinction in the continental United States by the end of the 20th century, but now has a stable population and has been officially removed from the United States federal government’s list of endangered species.

* Wingspan and body weight of the males: up to 2,5 m; 4 kg.
* Wingspan and body weight of the females: up to 3 m; 6 kg.
* Preferred prey: fish (many bald eagles live close to open water).
* Vision: stereoscopic, and eight times better than the vision of human beings.
* Nest: the eagle’s nest is called aerie. It is used repeatedly over many years and can weigh up to 2 t.
* Talons: sharp claws. The toes are short and powerful with large talons, which help to snatch the fish out of the water.
* Maximum velocity: It reaches speeds of up to 75 km/h when gliding and flapping.

The plumage of the immature is brown. The distinctive white head and figure are developed a few years later, when it reaches sexual maturity. Bald Eagles are distinguishable from the Golden Eagle (Aquila chrysaetos) in that the former has a more protruding head with a larger bill and feathers which do not completely cover the legs. The smallest specimens are those from Florida, where an adult male may barely exceed 2,3 kg, and a wingspan of 1,8 m. The largest are Alaskan birds, where large females may exceed 7 kg and have a wingspan of over 2,5 m.

The Bald Eagles of the northern range of distribution belong to the subspecies washingtoniensis, while the southern eagles belong to the leucocephalus- subspecies. Both subspecies are separated from each other at approximately latitude 38° N, or roughly the latitude of San Francisco; the northern subspecies reaches further south than latitude 38° N on the Atlantic Coast, where they occur in the Cape Hatteras area. Naturalists like Audubon believed that the extraordinary big eagles such as those found in Alaska belong to a third subspecies, alascanus or alascensis. Audubon names it Washington’s Eagle, in honour of George Washington; However, the existence of this subspecies could not be proved and it’s bigger size might follow Bergmann’s rule.

The Bald Eagle forms a species pair with the Eurasian White-tailed Eagle. The pair diverged from other Sea Eagles at the beginning of the Early Miocene (c. 10 Ma BP), if the most ancient fossil record is correctly assigned to this genus.
The Bald Eagle is a powerful flier, and soars on thermal convection currents. It’s average life span in the wild is 20 or 30 years, though it can live up to 50 years. Life expectancy in captivity is even higher, reaching up to 60 years.

Facts:
How are they? The Bald Eagle is a highly recognizable eagle of approximately 75-105cm of body length. The wingspan of the male eagles can reach up to 2,5m, while the wingspan of the females is even higher and can reach up to 3m. The adult Bald Eagle has a brown body with a white head and tail. The plumage of the immature is brown. Young eagles do not have white feathers on head and tail until they reach sexual maturity.
Where do they live? Close to rivers, seas and coastal areas.
How is the species geographically distributed? From Alaska to Florida and the North of Mexico.
What do they feed on? Fish, birds, mammals, reptiles, invertebrates and carrion.