From September 1 to June 30 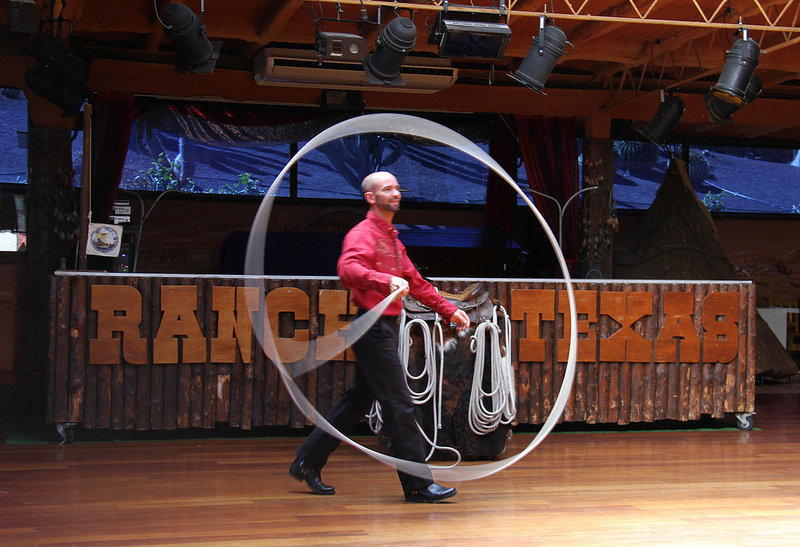 In Rancho Texas Lanzarote Park we have Mister Dakota, a cowboy he loves the lasso just as the whip. Indiana Jones would marvel his skill while watching the spectacular show and intense moments.

A vaquero (cowboy in Spanish) is the specialist in charge of the tasks related to livestock in the western United States and northern Mexico states of Chihuahua and Texas. His reputation acquired significance in the second half of the nineteenth century with the rise of cattle routes from north Texas to the United States after the Civil War, when the transport of animals by land required a great effort and great skill and endurance by the riders.

Their lifestyle and their work was broadcast by the Mexicans who lived in what is now Texas and raised cattle introduced by the Spanish since the sixteenth century.

The Spanish were the first Europeans to set foot on North American soil. Specifically, Juan Ponce de Leon came to Florida in 1513 and from there explored and colonized California, New Mexico, Arizona, Texas, Nevada, Florida, Utah and parts of Colorado, Wyoming, Kansas and Oklahoma territories that belonged to Spain over 309 years.

For those territories cattle moved to populate the vast plains. Against the background of the plains charrería Apan (traditional farming activities) arised luck work and recreational activity among Spanish and Mexican cowboys in Pecos Valley.

Note that the term “rodeo”, the Spanish word arena, first used in the United States from Mexico territory taken in the nineteenth century.

After that vast Mexican territory became part of the United States, many Anglo-Irish immigrants settled in the new territories quickly joining the Texans cowboy activities.

Discipline was converted to a sport and cowboys became specialists in the loop, jugglers that offer a variety of movements with lasso and its various features that astonish us by their skill, ability and expertise.

Here are some sets of rodeo in the use of the loop:

Double bind: The double loop is the only rodeo event where two cowboys will compete as a couple. The “header” lassos the calf´s horns and ride on the left. Then the “heeler” starts working, roping the calf’s hind legs. The couple that achieves to rope the calf’s hind legs is the winner.

Lazo simple: The cowboy must “catch” his calf with a lasso, dismount and run to him, throw the animal of 140 kg to the ground, gather three legs of the bull and tie with a string of eight feet long and put his hands up in the air once finished.