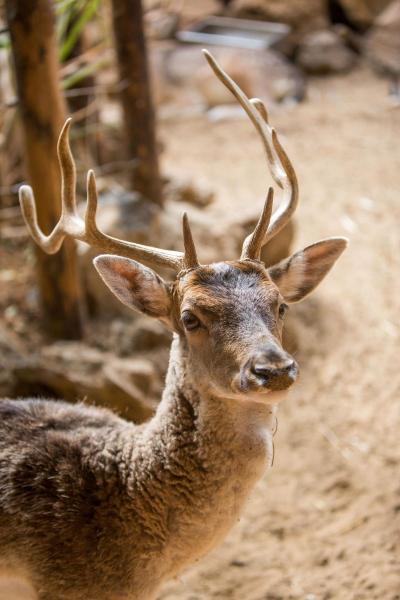 The Fallow Deer is a medium-sized ungulate species, original from western Asia and southern Europe. You will find the Fallow deer in the Lilliput Farm at Rancho Texas Park in Lanzarote. The mayor difference between other deer species and the Fallow Deer is in their size. The Fallow Deer is of minor size and it’s coat colour is reddish-brown. Only the males, the bucks, have antlers. These are broad and shovel-shaped. Fallow deer have many colour varieties, but they are typically fawn-coloured in the summer months and reddish-brown in winter. They have yellow-white undersides, white spots and a black line that runs along the back to the tip of the tail. The spots become less conspicuous or disappear in winter. With regards to other deer species, the Fallow Deer’s tail is much longer, with black tips at the end. The area around the anus has a characteristic marking in black and white. A long time ago, the Fallow Deer has been introduced in Europe, including Great Britain and Ireland. A bigger subspecies habits in Iran and North Africa. The Fallow Deer is easily tamed and is often kept semi-domesticated in private parks in many European countries such as Germany and England. 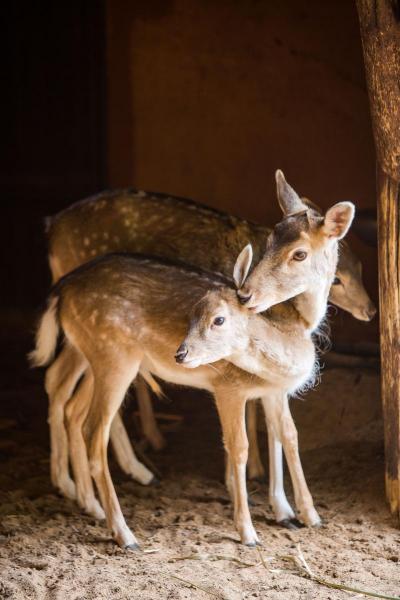 In prehistoric times, an enormous deer with palmate antlers, similar to those of the Fallow Deer, inhabited Ireland, England, northern and central Europe and western Africa. This species was known as the Giant Deer from the Highmoor, Giant Fallow Deer or Irish Deer. In height, this deer was similar to the Alaskan Moose. Its antlers were extremely large, reaching up to 3 m. Supposedly, this species became extinct 11.000 years ago. Records of it’s existence were found in Ireland in 1588. Later, rock paintings were found in France, showing a giant deer which was identified as the same species. Thus, this species coincided with the first human beings.

The Fallow Deer is a good example for sexual dimorphism. The male deer, called “buck”, is not only of bigger size than the female, called “doe”, but is also has antlers, which are renewed year after year and get bigger with age. Fallow Deer usually live in large herds formed by does and their offspring. During the breeding season bucks will spread out and females move between them. The breeding season, known as the rut, takes place in the fall, mainly in October. At this time of year, fallow deer are relatively ungrouped. The bucks fight for the does and the bucks with the biggest antlers usually turn out to be the winners. The gestation period is approximately 7 1/2 months, with most fawns occurring in June. Generally, only a single fawn is born, but exceptionally it can be two or three.
At two years of age, young bucks are usually expelled from the herd and form bachelor groups with other adult bucks until the next rutting period.

Fallow deer are herbivores and graze all types of ground vegetation. They also browse shrub layers in a wood, and the growing shoots and leaves of holly and beech trees.

Facts:
How are they? Hoofed game species with large and slender neck. Their head is thin and their ears large.  They are 1,30-1,70 m long and 80-105 cm shoulder height, and 40-100 kg in weight; The species is very variable in colour, with four main variants, “common”, “menil”, “melanistic” and “albinistic”.
How do we differentiate males and females? Only the male deer, the buck, has palmate antlers. These get bigger with age and renew every year.
Where do they live? Although we can find them in different types of habitat, their preferred habitat is mixed woodland and open grassland.
How is the species geographically distributed? The Fallow Deer can be found in Asia Minor, Germany, Iran, Palestine, the Mediterranean area of southern Europe, North Africa and Oceania.
What do they feed on? Fallow Deer are mostly grazers, feeding on grasses and a variety of herbaceous plants. They also often feed on trees and shrubs.