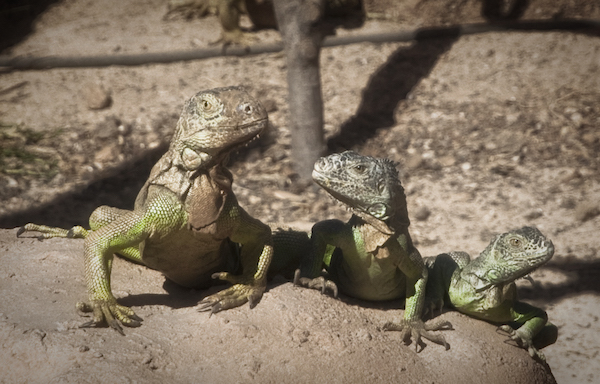 The Green Iguana or common iguana (Iguana iguana) is a large, arboreal species of lizard of the genus Iguana, native to Central and South America. The Green Iguana ranges over a large geographic area, from Mexico to northern Argentina, southern Brazil and Paraguay, as well as on the Caribbean Islands and Florida. It grows to 2 metres in length from head to tail, with an average body weight of approximately 15kg.

It is possible to sex a Green Iguana by studying the central part of the hind legs. Male Green Iguanas have highly developed femoral pores on the underside of their thighs which secrete a scent. These are usually covered with a ceraceous substance. In addition, the dorsal spines that run along a Green Iguanas back are noticeably longer and thicker in males than they are in females.
Recent research has demonstrated that iguanas and other popular pet species are poisonous. However, their poison is not produced in sufficient quantity to do harm to humans. Furthermore, the iguana would have to bite the human to inject the poison, which is rather unlikely.

Iguanas are diurnal and strictly herbivore, feeding mainly on leaves, flowers, fruits and buds, but occasionally they will include insects and other small animals in their diet. Green Iguanas are perfectly camouflaged with regards to their environment. The iguana’s skin is covered with small scales. It possesses a row of spines along its back and tail, which is longer and thicker in the male than in the female. In addition, iguanas have well developed dewlaps which help to regulate their body temperature. After copulation, the female digs a hole with a diameter of approximately 2dm, where she lays a clutch of up to 60 eggs. These have approximately the size of table-tennis balls. The eggs have to remain at a temperature of around 30ºc.

Green Iguanas are extremely popular pets. More than 800.000 specimens were imported to the US in 1995. The mayor part of these iguanas were captured in their original habitats. In spite of their robust appearance, thousands of iguanas die before their first year in captivity ends. In 1998, the “Day of the Iguana” was created, with the aim of sensitising pet-holders and other consumers of the fact that the iguana is a “threatened pet”.

Facts:
How are they? Reptiles with robust body and sharp and strong claws. Their skin is dry and covered by small scales around the neck. They have a well developed gland underneath their ear and a big dewlap. Furthermore, they have dorsal spines that run along the green iguana’s back. These are larger on the neck. Green Iguanas come in a wide range of colours, varying from bright green in young iguanas to greyish-brown in adults. Sometimes they present transversal lines in yellow or green-turquoise colour.
How to differentiate males and females? Males are bigger and heavier than females. Furthermore, the dorsal spines that run along a Green Iguana’s back are noticeably longer and thicker in males than in females. Also the dewlap is bigger in males.
How is the species geographically distributed? Green Iguanas can be found from Costa Rica to Brazil, Ecuador and the Virgin Islands.
Where do they live? Iguanas are often found near water, but also in dry areas, with bushes and trees. Furthermore, they inhabit open rock areas, canyons and cliffs.
What do they feed on? Leaves, seeds, fruits and flowers.