For a quick tasty meal, but quality …  … try our delicious burgers, pizzas, spaghetti, onion rings, baguettes, chicken nuggets and salads … watching the lasso & whip show … and then continue to visit the park.

Seasonal entrance card for the park.

For only 60€ for a child you can visit Rancho Texas Park
as many times you like for a full year.
And only 80€ if you are over 12 years of age. 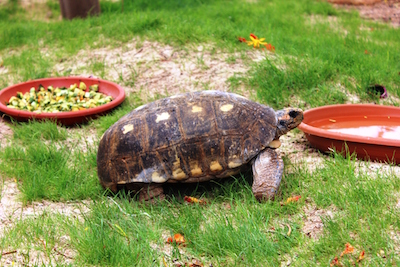 The Red-footed Tortoise (Chelonoidis carbonaria) is a tortoise native to the tropical forests of South America (Guyana, Venezuela, Brazil, Ecuador, Paraguay and some of the Caribbean islands).
The species has a dark carapace with yellow blurs in the middle of the scutes and on the border of the carapace. Although there might be many variations in colour, all Red-footed Tortoises have red or orange scales visible on their limbs, as well as their heads and tails. In some individuals, the carapace becomes indented on both sides giving them the illusion of having an hourglass waist. The males are usually slightly bigger than the females, with approximately 30,5cm in males and 29cm in females. They are sexually mature at a smaller size than this. Male Red-foots have a concave plastron, and their carapace is flatter than the females’ and the "hourglass" figure is much more developed in males than in females. Furthermore, the males tail is larger and wider than the females. No subspecies has been described so far, but due to the fact that the species’ range of distribution is wide, there is many different variants in size and colour. 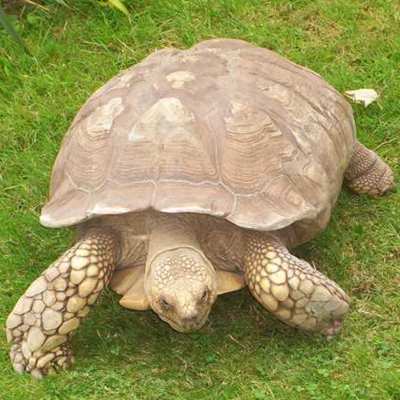 The African Spurred Tortoise’s name refers to the furrows on the tortoise's scales on the front legs. It is the third largest species of tortoise in the world and the largest species of mainland tortoise (the two largest turtle species live on islands). It belongs to the family Testudinidae (mainland tortoises).
The range of distribution and behaviour of the African Spurred Tortoise is similar to the Leopard Tortoises’ (Geochelone pardalis). Both species are easy to differentiate, as the latter is smaller and has a stockier body. Furthermore, its carapace is more bulged and the colour pattern different.