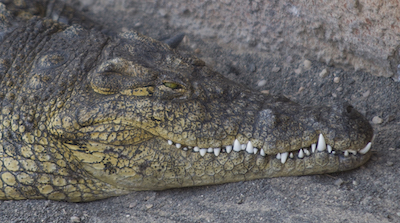 Nile Crocodiles are ancient reptiles that first appeared on the earth about 200 million years ago. They are supposed to be the vestiges of the big era of the reptiles. Their predecessors were of lighter stature than today’s crocodiles. They used to live on the ground, but quickly divided into aquatic and amphibious variants. Unlike alligators, crocodiles live in the tropical and subtropical areas of the world. The modern crocodiles are amphibious and spend most of their time underwater. They are good swimmers, moving ahead due to the rhythmic movements of their powerful tail. Occasionally, the may use their tail to capture prey, towing it from shallow into deep water, where they can devour it easily. 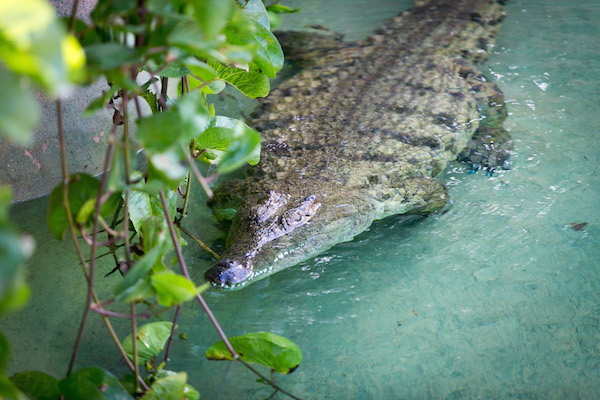 Crocodiles hardly have natural predators. They are perfectly adapted to predatory life. A type of shell made of osseous plates covers their thick skin. They have powerful jaws, with 30-40 teeth on each. These the teeth mostly interlock, but almost all of them stay on the outside of the mouth when closed. This makes them different from alligators. Crocodiles close their jaws with such enormous power, that they can even crush the bones of small mammals. However, they are unable to open them with the same force. This is why keeping the crocodile’s mouth shut with the hands is very efficient. When the crocodile ambushes its prey, the only visible parts are nostrils, eyes and ears, the rest of the body remains concealed underwater.

Crocodiles have the richest vocal range of all reptiles, being capable of making roaring and yelling sounds, especially during the mating season. On land, they normally crawl along on their bellies, but they can also “high walk” with their trunks raised above the ground like mammals.
From the physiological point of view, crocodiles are the most advanced of all reptiles: their internal anatomy is similar to the bird’s. They have a four-chambered heart and well developed senses. Like all reptiles, crocodiles are hematocryal, which means that their body temperature depends on the temperature of the surrounding. They dig themselves in mud to hibernate or spend the dry season. In hot regions they remain inert during the dry season, in colder climates during the winter.

Crocodiles are oviparous, which means they lay eggs. They reach sexual maturity at the age of 10 years. Clutch size ranges from 20 to 90. The eggs are more or less of the same size as goose eggs. The females dig their eggs in sand, mud or vegetal residues, where they are incubated by the heat of the sun or vegetal decomposition. The females of some crocodile species remain close to the nest in order to protect the eggs and care for the newly hatched. However, many eggs are stolen by predators. The family habits of crocodiles are unique among raptors, which reconfirms their affinity for birds.

Facts:
How are they? Big reptiles, with body sizes of up to 5-6metres. Their head is plain and they have large snouts. Their powerful jaws are equipped with cone-shaped white teeth. Their body is elongated and ends in a large tail, which is bigger than the actual body. Two bands of osseous plates cover the crocodile’s back.
How is the species geographically distributed? Sub-Saharan Africa and the island of Madagascar.
Where do they live? In seas, lagoons and rivers. They prefer deep and calm waters.
What do they feed on? Fish and all kinds of animals that get close to the water for drinking.