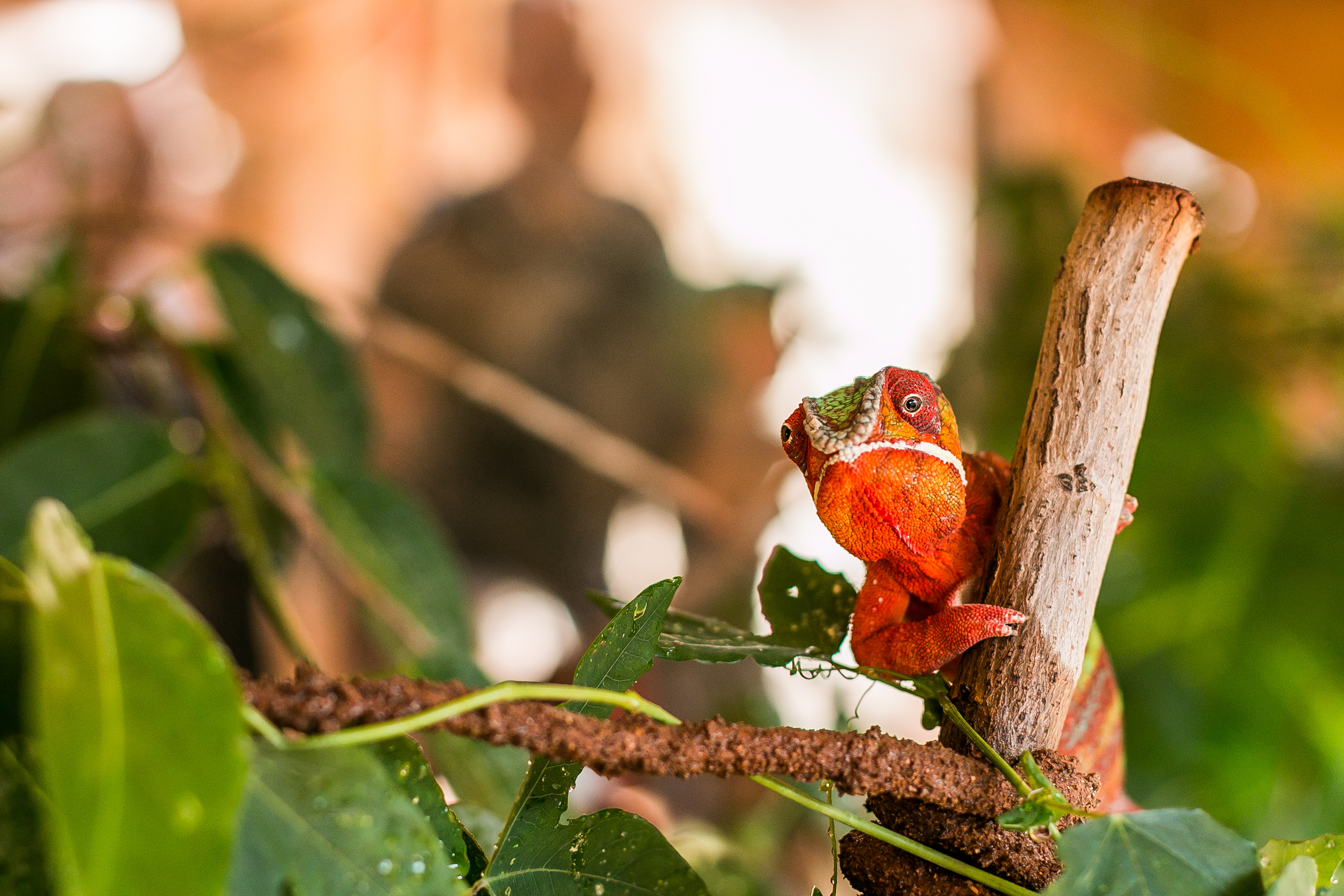 The incredible colours, in more than 25 varieties and their well known gentle character make these a suitable pet for both those starting out and those who are fascinated by this specie and wish to obtain new colours. The panther chameleon can grow up to 55cm but normally doesn’t grow larger than 45. Females are smaller, at around 30-35cm. It’s thought that the Rainbow variety otherwise known as Anstiranana or Diego Suarez, are the largest of the species.

They originally come from Madagascar, extending from the west coast to the east and north. They also live on nearby islands and islets such as Mauricio and Reunion, where they were most likely hand introduced.

Due to its wide distribution, covering areas that are several hundred of kilometers apart, it would be naïve to expect to find panther chameleons with defined chromatic patterns. The numbers of morphs are unlimited! Groups’ isolates by natural barriers, without external genetic exchange have given place to specific forms receiving the names of their places of origin.

Because of these phenomenon’s, we can find completely blue panthers, red, pink, green striped, orange, yellow, etc, the varieties being endless.

Males colours vary considerably depending on their mood or the stimulations received, whereas females in all varieties have a similar base colour, being pink or salmon coloured with black when they reach sexual maturity at six months to a year. The females colouring depends on their mood responses, if they are sexually available or not, making them change to a brighter, more contrasted pink and black or orange and black.

The panther chameleons in Madagascar, even with the massive destruction of their ecosystem caused by the deforestation for agricultural reasons, are still growing in numbers, thanks to their great ability to adapt to the circumstances. It seems that they now prefer open forest areas to the leafy woods that were their natural habitat. They make colonies in cultivated fields, gardens, coffee bean crops, etc and are very common even in coastal dunes. We can find them from altitudes ranging from sea level to 1.200meters.

They live in dense colonies which have dominant males to defend the territory from other males, especially if there are receptive females nearby. Rivalry in males is shown in a display of their finery, changing their colours and puffing up their bodies to appear larger. If they do not scare off their rival male with this spectacle they may initiate a physical fight, ending in painful bites and creating serious injury.

Females aren’t as aggressive with other females as males are with others and although they have been known to fight, it’s a rare sight to see.

“Non receptive” females show aggressiveness towards males that try to copulate with them by opening their mouths, swaying and finally biting the suitor.

These chameleons are avid predators of any animal that they can fit in their mouths. They hunt all types of insects, spiders and small vertebrates, including offspring that are likely to become food for the fast and hungry adults.

In captivity they feed on grasshoppers, crickets, silkworms, roaches, zophobas, etc, depending on the choice available. 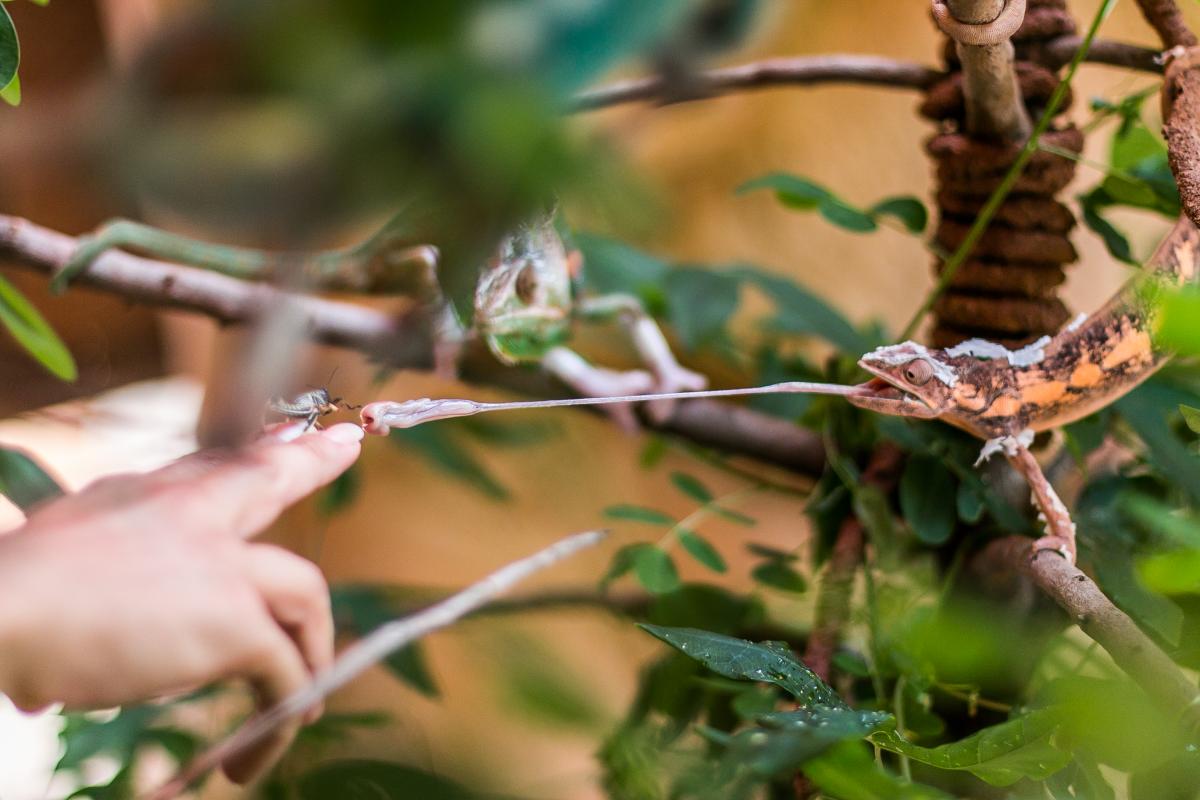 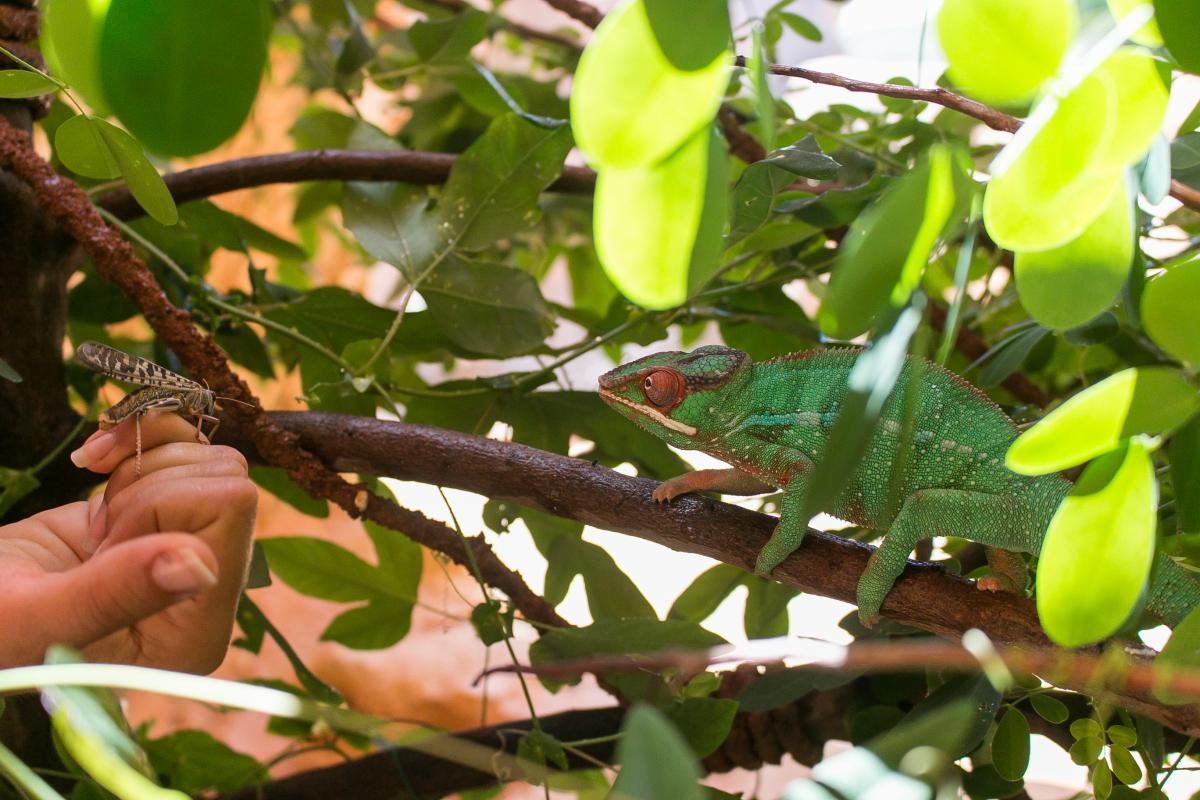 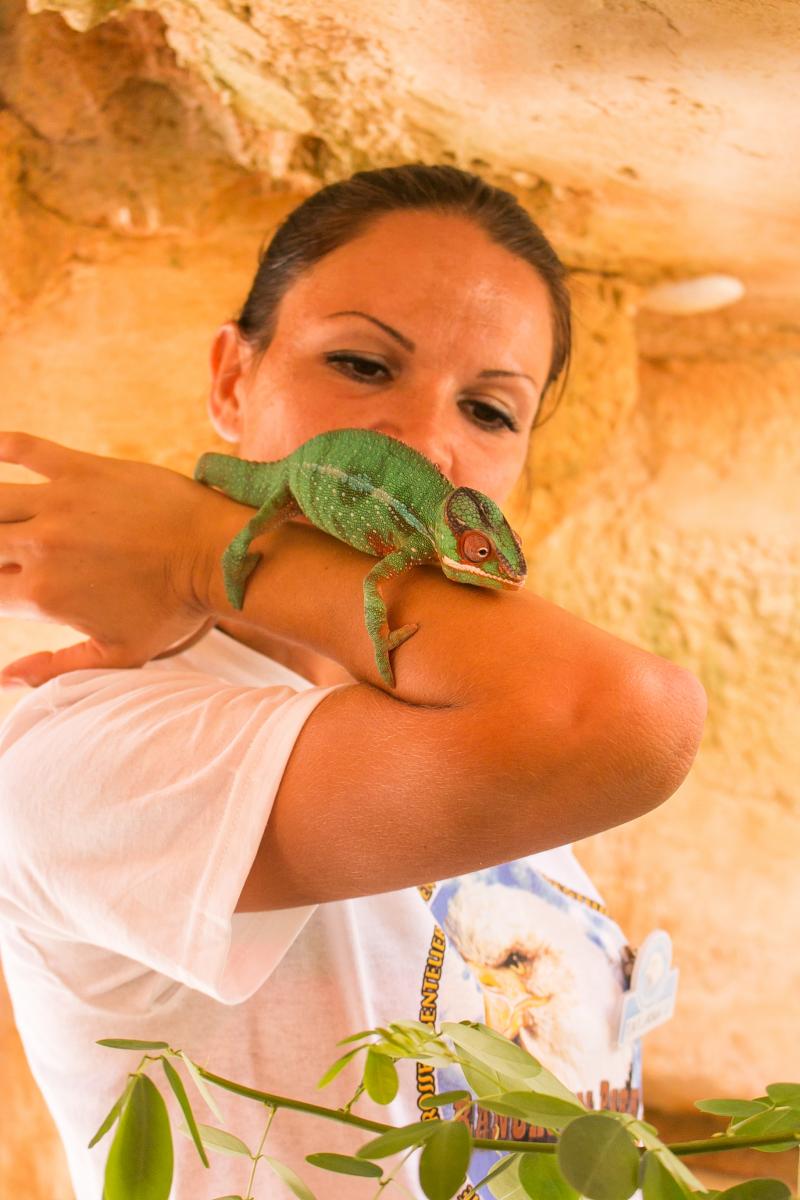 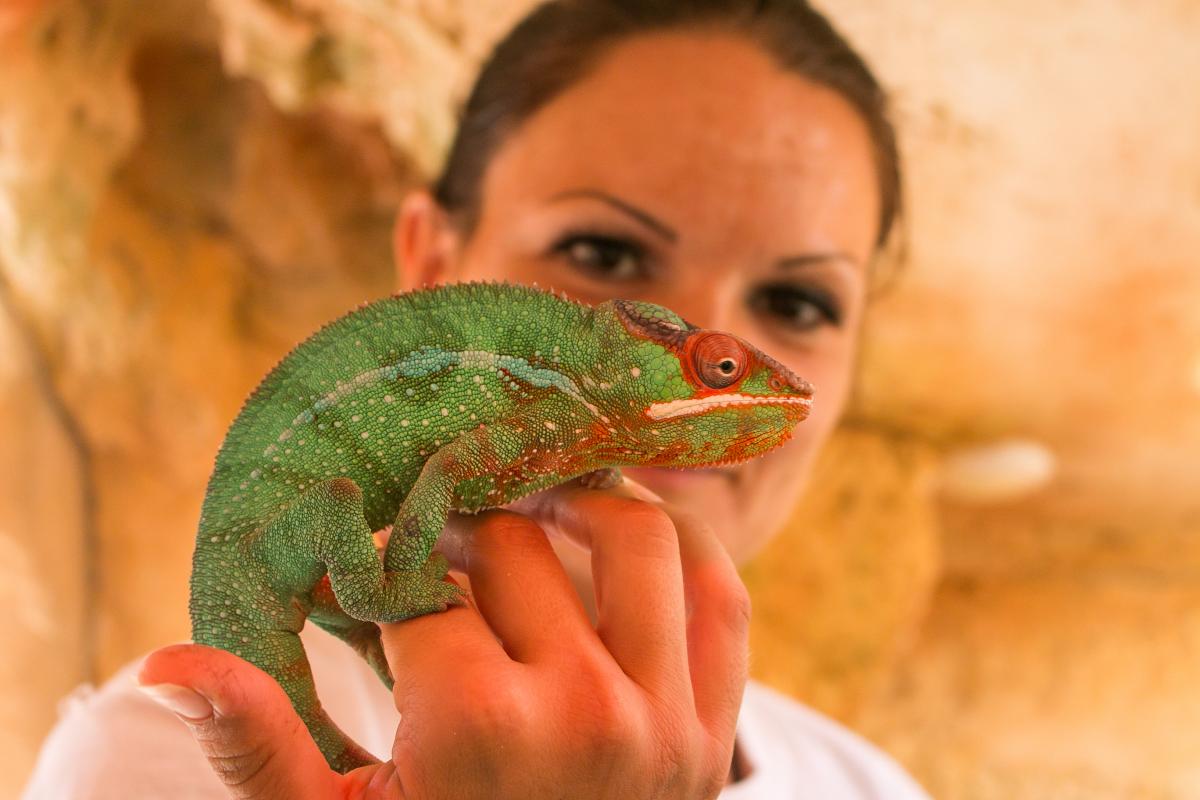 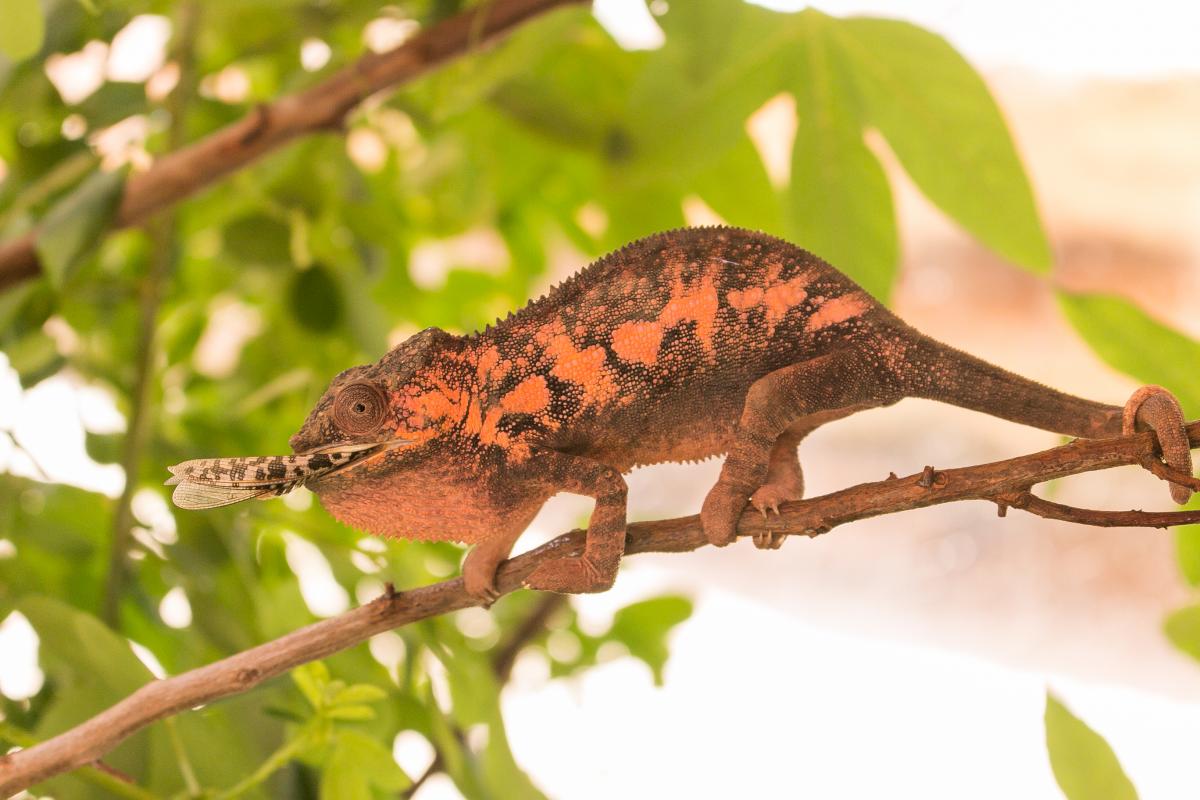