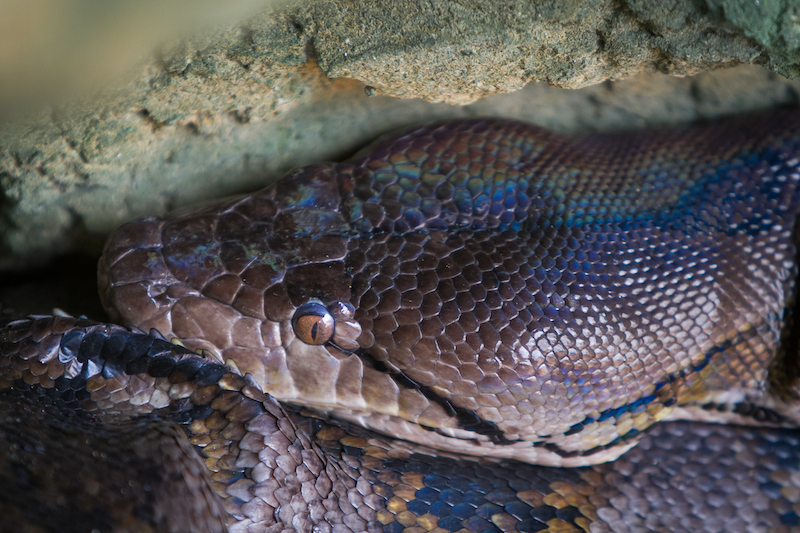 These snakes vary in size, usually from 3 to 7 meters long but others growing up to 10

meters. Their sizes depend on their habitat and the alimentation they receive. They can

weigh up to 80kg, but most of them are much smaller. They have a very complex

invisible to prey. They are a mix of olive green, black, white and a gold like shade of

This specie comes from Southeast Asia and has inhabited many islands,

due to the great distance they can swim. They tend to live in forests and jungles, near to

rivers and lakes to facilitate their access to water.

lakes. They are slow movers but can cover great distances in one day. They are mainly

active at night, can be very aggressive and when they feel threatened they curl up.

Because of their size these snakes are very heavy.

the water, as it’s a great place for them to hunt from.
Diet:

These snakes have a varied diet, consuming rodents, primates, even eating animals

heavier than themselves! They ambush their prey then curl themselves around them,

crushing their airways, eventually killing them. They take a long time to digest their

food and because of this they only eat once every few weeks.

They’ve been known to eat pets like dogs or cats and farm animals, creating tension

with farmers who breed these animals for a living.
Reproduction:

These snakes can lay up to 80 eggs at a time, the mother abandoning

them as soon as they’ve been laid. She finds a warm place to lay them so they will be

feet long. These babies will have to fend for themselves from the start.

snakes, just about them wrapping themselves around the person, as they can crush them

to death. Some people that have had these snakes as pets have been killed by their

powerful grip as it takes an awful lot of strength to be able to free yourself from it.

They’re linked to a lot of deaths, both in the wild and in captivity, known to devour