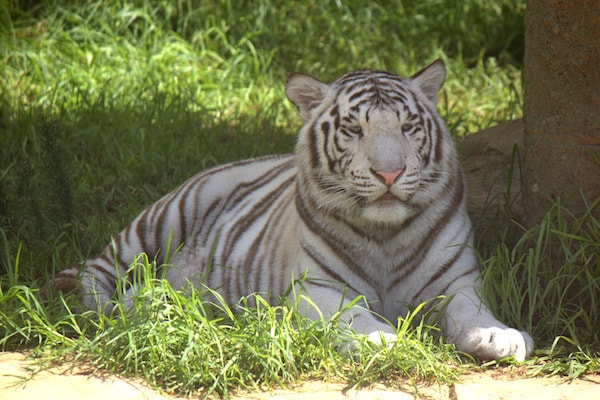 The tiger is the largest member of the Felidae family, reaching up to 3 meters in total length and weighing up to 300kg. Tigers are carnivore animals. Though native to the north of Siberia, we will also find tigers in the warm tropic forests of India. Their normal coat colour is orange, but two colour variations are known: black and completely white. These three phenotypes share the pattern of stripes, which is unique to each animal, much in the same way as fingerprints are used to identify people. In our marvellous theme park in Lanzarote you will find some of the most beautiful white Bengal tigers. Their genetic condition nearly eliminates pigment in the normally orange fur although they still have dark stripes.

The white tigers where the first of all tiger variations to be threatened by extinction due to the fact that their white fur was very popular among those who believe the white tigers to have “royal” qualities. This is why they are often called “royal white tigers”. White tigers are not very common in the wild, though they are frequently held in captivity, where they breed without any problem, for which their numbers are on the increase.

White tigers do not constitute a separate subspecies of their own and can breed with orange ones, although all of the resulting offspring will be heterozygous for the recessive white gene, and rarely a cub with white fur will be born. In spite of being quite unusual, the white tiger has survived throughout history, which might be due to the fact that they are bigger in size than orange tigers. Bigger size can be an advantage for survival.

Tigers are territorial and generally solitary animals. Their preferred habitats are savannahs and forests. Tigers often require large contiguous areas of habitat that support their prey demands, mainly ungulates.  They are good swimmers, but cannot climb very well. The gestation period is approximately 100 days. The litter usually consists of 1-6 cubs. These will not become independent until they reach 3 o 4 years. At that age, the male cubs leave their mother and start to look for their own territory. The female cubs establish their own territory close to their mothers.

Facts:
How are they? Tigers are the biggest felids of world, reaching up to 2,13-3,35m in length and weighing between 100 and 306kg. Generally, females are smaller than males. They typically have rusty-reddish to brown-rusty coats, a whitish medial and ventral area, a white “fringe” that surrounds the face, and stripes that vary from brown or grey to pure black. White tigers are bigger in size than orange coloured ones. Their coat, except for the black or dark-brown stripes is completely white. The stripe pattern is unique in each tiger, and thus could potentially be used to identify individuals, much in the same way as fingerprints are for humans.
Where do they live? In dense forests, but also in open areas, such as savannahs.
How is the species geographically distributed? India, Bangladesh, Bhutan, Burma and Nepal.
What do they feed on? Any animal of medium or big size, generally ungulates. Their diet includes monkeys, boars, tapirs, deers, antilopes, buffalos, etc.