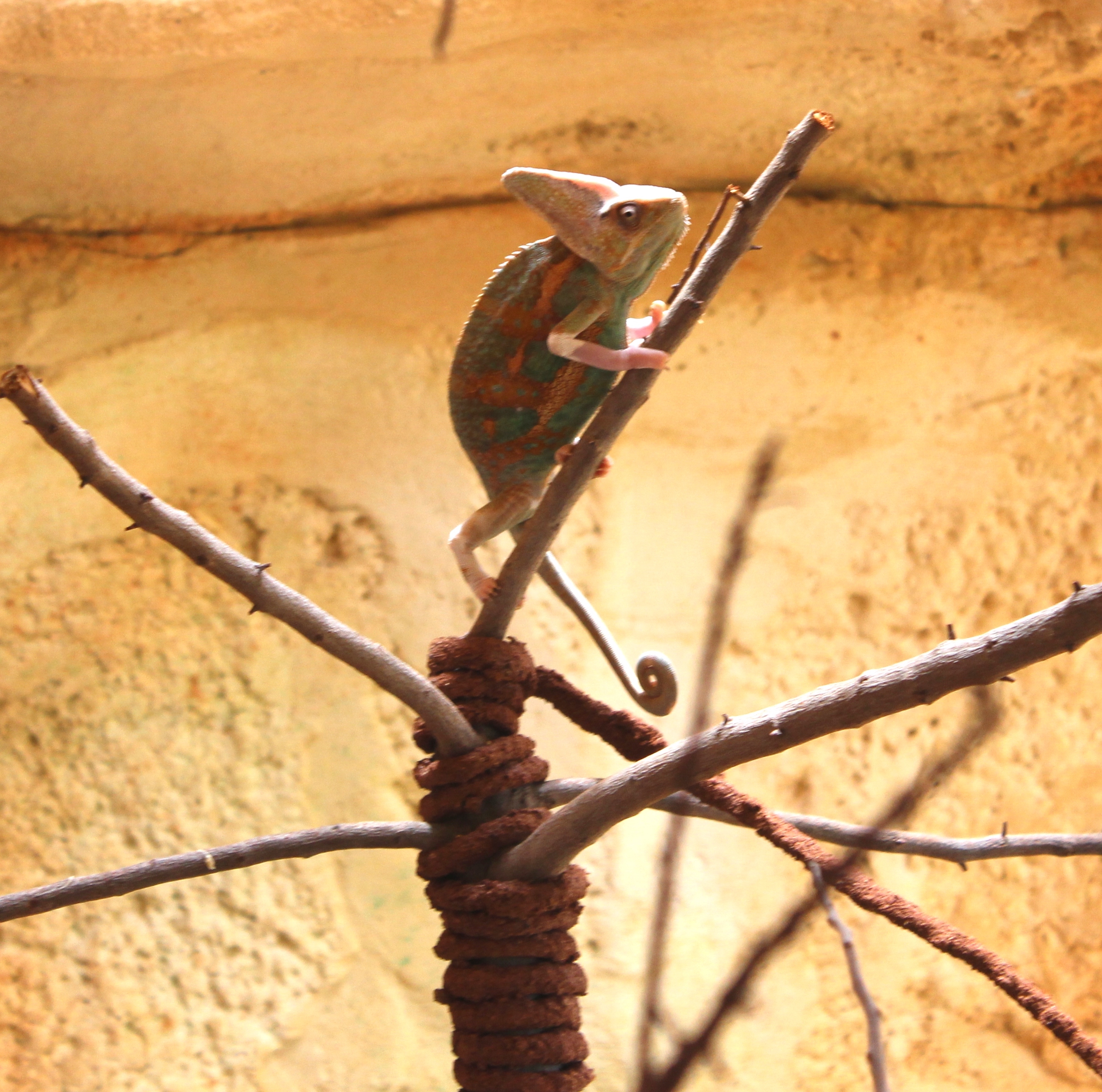 Distribution: Originally found in the Arabian Peninsula, Yemen and Saudi Arabia, the coast and interior where the climate is influenced by the Red Sea.

Description: The males of this species are some of the largest chameleons in the chamaeleonidae family, some measuring nearly 60cm long (including their tail).
Females are considerably smaller, measuring around 25-35cm.
Both male and female are recognized by their “helmet” that gives them the name “calyptratus” coming from “calyptra”, which was a veil that women in Greece used as headdresses. It also differentiates the males from the females, the males having much larger “helmets”.

Another way to tell the difference between males and females are the colourings. The males have three light coloured vertical stripes on their flanks, between their extremities, usually green and brown if they are not under stress, they are usually quite clear, sometimes having small white patches or spots. These chameleons don’t change colour to camouflage themselves, using them instead to show their emotions, threats, stress levels and to show others their wish to mate or refusal of a partner. The females’ refusal colour is a dark green, with pale green and yellow spots and is usually due to them already carrying young.

Their extremities are prehensile and allow them to climb trees and plants in their habitat. Because their tail is also prehensile it makes them similar to some primates opposed to other reptiles whose tail is not. This special tail allows them to stand on it and reach further to climb or catch prey; they can also lower themselves by curling it around branches or similar objects and hang in the air by their tail. On each extremity they have 5 fingers but these are fused together creating a glove like appearance with only their nails to distinguish the number of fingers.

Reproduction: Once the male has found a receptive female the mating can begin and may be repeated various times in the same day. Once the mating has been successful the females colouring will change to a dark green with pale yellow and green spots that indicates her gestation and also her stress to any other males looking to mate.
In approximately a month and a half, time varying depending on food supplies and temperature, the eggs will be laid. Before this happens the female will come down to the ground and create a cave where she will lay around 40 eggs that will hatch in 5-7 months.

Diet: The main part of their diet is made up of insects, being one of the only species that also adds certain vegetation. This is a handy way of always having access to liquid if they cannot find a natural source of water in their surroundings. In captivity, a healthy diet consists of crickets, grasshoppers, locusts, silkworms, cockroaches bred in captivity and in smaller amounts because of their high fat content, honey and flower worms. Large males are capable of eating small mice, although it isn’t necessary for a healthy diet.