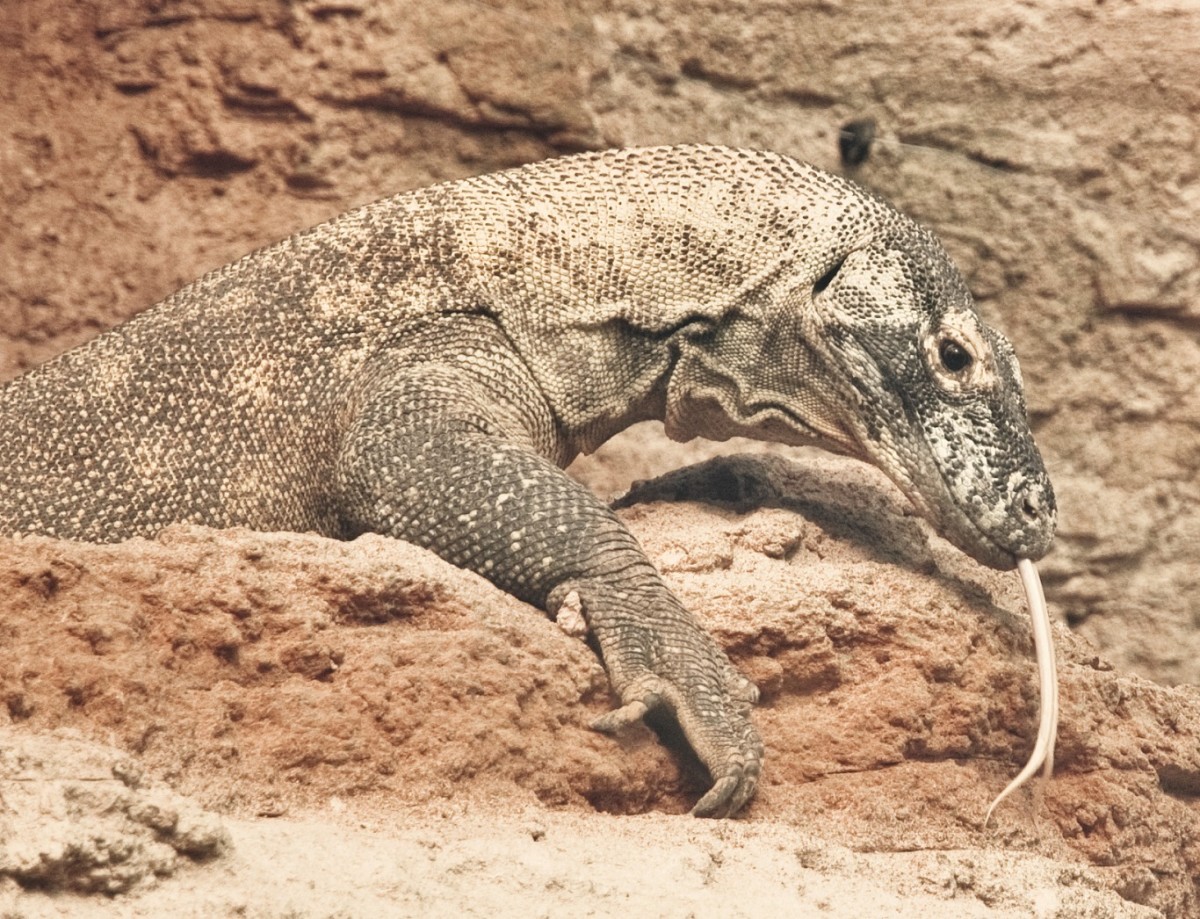 We all hear the name and gasp with awe but what do we really know about these giant lizards?
As we think they are fascinating we thought we’d tell you a few interesting things about these incredible creatures.

The Komodo dragons are the largest living lizards on the planet. They can be found in the wild on only five islands in Indonesia: the Lesser Sunda Islands of Komodo, Rinca, Gili Motang and Gili Dasami — all within Komodo National Park — and the island of Flores, where the Komodo roams freely. Males have been known to reach up to 3 meters in length and females up to 1.8 meters, and they can weigh more than 130 kilograms!
They can be found in a variety of colors, including blue, orange, green and gray. The surface of their skin is rough and durable, reinforced with armor like plates called osteoderms. They have long claws and a large, muscular tail.
It was once thought that Komodo Dragons killed their prey with the bacteria in their mouths, it was only years later that a researcher, Bryan Fry, discovered that the Komodo actually possess venom glands that squirt the venom through the gaps between their teeth, whilst biting the prey. A curious fact is that although this venom is lethal to others, fellow Komodo dragons seem unaffected by it and when bitten in territorial fights seem unharmed by the toxins.

Unlike other predators such as the crocodile, the Komodo’s bite is weak and he does not shake the prey to inflict damage as other deadly predators do, but bites lightly with his razor sharp teeth and pulls back, using his strong neck muscles to tear the prey’s skin ferociously. If the Komodo were to use the same techniques as the crocodile, its jaw would snap so it possesses other ways to make capturing prey simple…

How exactly does the Komodo dragon capture its prey?
Although they are more than happy to feed on carrion that they locate with their great sense of smell (that is capable of locating prey more than 10 kilometers away), if he has to hunt, he isn’t one to rush it. When hunting, Komodo dragons rely on camouflage and patience, lying in wait for passing prey, this being anything from pigs, birds, to water buffalo or even young Komodo’s! When a victim ambles by, the dragon springs, using its powerful legs, sharp claws and serrated, shark-like teeth to eviscerate its prey.

After biting the prey and inflicting large open wounds it releases it. The prey, oblivious to the venom that is now working its way through its blood system, runs, thinking innocently that it has got away.
Its venom is lethal, injected from two long venom glands, running down the length of its jaw, it drips straight into the wounds that have been inflicted by the teeth. This venom is loaded with toxins that prevent blood from clotting and induces shock.

And now the Komodo dragon will wait patiently, knowing it is only time, he will calmly follow an escapee for miles as the venom takes effect, using their keen sense of smell to hone in on the corpse.

A Komodo dragon in the wild can survive on around 12 meals a year, if these meals are sufficiently large and nutritious. It doesn’t sound a lot but when you realize that it can eat a whopping 80 percent of its body weight in a single feeding, it starts to make sense!
The muscles of the Komodos jaws and throat allow it to swallow huge chunks of meat with astonishing rapidity. Several movable joints, such as the intramandibular hinge, open the lower jaw unusually wide. The stomach expands easily, enabling an adult to consume such a huge amount. Komodos have the ability to throw up the contents of their stomachs when threatened to reduce their weight in order to flee.

Komodo dragons are generally solitary outside of mating season which is between May and August. The female will then lay around 30 eggs in September.

Although there is no evidence that Komodo mothers care for their young once they have hatched, they are very careful with their clutch of eggs and go to great lengths to ensure that as many as possible will hatch. For this reason, the female will build decoy nests to confuse predators and keep her eggs safe. Then she will incubate the grapefruit-sized eggs for around three months until they hatch.

A very interesting fact about Komodos is that the females can have virgin births. This means that they don’t need a male to fertilize an egg for it to hatch. Creating offspring without the help of the opposite gender is called asexual reproduction. Komodo dragons can reproduce through both sexual and asexual reproduction making mating an option, not a necessity. This offspring will be a clone of the mother and will have the same DNA as her, as only her genetic information has been used to create it, whereas if the egg is fertilized by a male it would create a unique string of DNA caused by the fusion of two different types of DNA; the females and the males.

These are just some of the fascinating facts about Komodo dragons, to come and see them up close and personal, visit our Reptilarium in Rancho Texas Lanzarote Park!